Most Anticipated Books of 2017: Every Deadly Kiss

I've decided to do a series of posts, one each day over the next week highlighting the books that I am most looking forward to that are releasing in the remainder of 2017
My first pick is...EVERY DEADLY KISS by Steven James 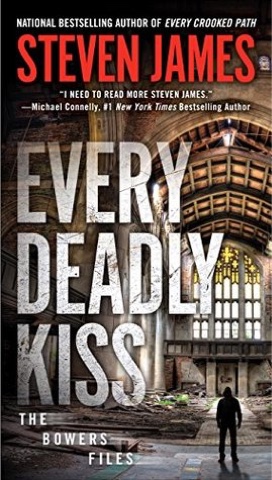 FBI special agent Patrick Bowers grapples with a baffling series of murders in Detroit—and discovers a terror plot with roots that stretch back centuries.

Called in by an ex-girlfriend to consult on a case, Patrick encounters the work of a killer who displays a stunning degree of ruthlessness. Bowers is shocked to find that the slayings are linked not just to his own history with a known terrorist, but to his former lover as well—and that her secret past might hold the key to stopping the crime spree. As layers of intrigue peel away, the city is pushed ever closer to a seemingly unstoppable bioweapon attack.

Unnerving and laced with breathtaking suspense, Every Deadly Kiss is a surprising and complex thriller that will keep readers obsessed to the final page.
Why I can't wait to read it: Steven James is one of my all time favorite authors! I've read all of his novels to date and loved every single one. I am so excited to read this new Patrick Bowers book when it releases in July!
Posted by Caitlyn Santi at 10:50 AM