Creston has fond memories of his boyhood in Bath, Ohio, where he became enchanted with his future wife, way back in the fourth grade. His father, Bernie, owned and operated The Weathervane Furniture Shop in town. The whole family lived right upstairs in the century-old house known as "The Shop."

Creston studied journalism at Bowling Green State University, then began his writing career. During the past 30 years, he has worked as a reporter, corporate copywriter, creative director, freelance writer, and author.

There's More Than One Kind of Poison in This Town


People are sick and dying. Rumors are swirling. Some claim chemicals leaking from a manufacturing plant are causing the cancer that's crippling people on the poor side of Trenton City, Ohio. Yet nothing at the plant appears amiss.

The problem remains a mystery until reporter Jack Crittendon's long-time mechanic falls ill and he investigates. Soon Jack becomes engulfed in a smokescreen of lies, setups, greed, and scandal.


The deeper he digs, the more toxic the corruption he uncovers. As he faces off with the big-time players behind the scenes and tries to beat the clock before more people die, he realizes the chillingly unthinkable--he knows too much.

If you'd like to read the first chapter of Poison Town, go HERE.

My Review:
I really enjoyed the first book in this series (Fear Has A Name) last year, and I was very much looking forward to this new release! I really liked the premise and the characters were very well written once again! I did feel like the identity of some of the villains was a tiny bit too easy to guess, and it annoyed me a little bit that in some cases it took the good guys a really long time to figure out who the villains were! I enjoyed this read and it had enough tension to keep me turning pages, but I don't think I liked the majority of the book quite as much as the first in the series. However, I love it when a book has a climax in which everything seems to be imploding on the characters, and you think there is nothing else that could possibly go wrong but yet things do. This book definitely did not disappoint in that area!

Overall, this was a very enjoyable second installment in the Crittendon Files series, I recommend this series! And after having read the excerpt of the next book in the series "Sky Zone", I am eagerly anticipating its release!

Review: A Broken Kind of Beautiful by Katie Ganshert, 5 Stars!!! 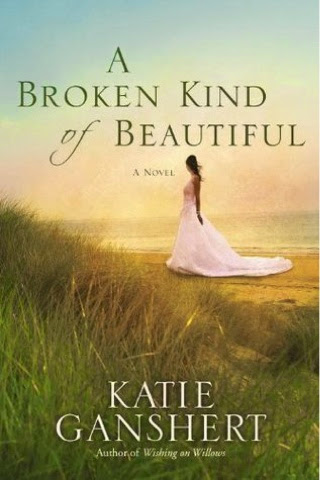 First off I just want to say that I have been in love with this book since the moment I first laid eyes on the cover, isn't it just gorgeous?!
After reading and absolutely loving Katie Ganshert's first two books last year, I knew I would love this one too! I was not disappointed! This book was amazing! I loved our heroine, Ivy. The way she changed from the person she was at the beginning of the book to the person she was at the end was truly inspirational!
And Davis, oh my gosh! He was a splendid addition to the line of incredible heroes this author has written, my heart melted at his tenderness and all the wonderful things he did for others. He was such a strong, yet delightfully flawed character. What more could you ask for? I also loved Sara, Marilyn, and Twila such wonderful secondary characters.
This is a little weird but I recently saw the movie "Breakfast At Tiffany's" for the first time, and in a way this book reminded me a little bit of that movie, at least in that it has a heroine with a broken past who doesn't know her true worth and the only way she does know to get through life is to use her physical beauty and sex appeal to her advantage, even though it has left her heart torn into a million pieces. And a hero who is seemingly the first man on the planet who is immune to her charms, and who sees her true worth and how special she really is. Not sure if that makes any sense but anyway, I LOVED this book! I was not bored for a minute while reading it, in fact I hated to put it down!
A Broken Kind of Beautiful far surpassed all my expectations and I highly recommend it!
Seriously go buy it now, it's that good!!!
I cannot wait to see what other wonderful treats of storytelling Katie Ganshert has up her sleeve!
I received this book for free from WaterBrook Multnomah in exchange for an honest review, my review was not required to be positive, the above review is my honest opinion. All thoughts and opinions are one hundred percent my own.
Posted by Unknown at 1:49 PM No comments:

After reading and enjoying the first book in this series last year, I was looking forward to this second installment. And while I did enjoy Dating, Dining, and Desperation, I didn't like it as much as the first book in the series. Once again I really liked Daphne and it was really fun to get reacquainted with her! At first I didn't care much for her new neighbor Sabrina, but she grew on me and I ended up liking her quite a lot! And I loved it when seven year old Mabel came into the story, she was just so adorable! I also loved that Daphne was writing a suspense novel! One of my favorite things about this series is the mystery as to who Daphne will end up marrying, a mystery that is made even more complex by the entry of several new possible love interests for Daphne in this book, I look forward to seeing what happens next in this series!
Most of the time I really enjoyed this book, but there were just times when  I found myself slightly bored with the story.
I recommend Dating, Dining and Desperation, it probably could be read as a standalone but I think you might want to read Lock, Stock and Over a Barrel first!
I received a complimentary copy of this book from the publisher via CFBA in exchange for an honest review. The above is my honest opinion. All thoughts and opinions are one hundred percent my own.
Posted by Unknown at 6:13 PM No comments:

In February my goal was to read as many books from my TBR pile as possible. I managed to get 7 books read, which I am really happy with! I also managed to reach the goal I've had for a while of reading all of Jody Hedlund's books to date, I read the last two I hadn't yet read in February, I enjoyed both of them and I think The Preacher's Bride is now tied with The Doctor's Lady for my favorite of her books! :)

The books I read were:

1. The Locket by Amanda Tru

2. A Match Made in Texas by Karen Witemeyer, Regina Jennings, Carol Cox, and Mary Connealy

3. The Preacher's Bride by Jody Hedlund

6. A Noble Groom by Jody Hedlund

My favorite read in February was definitely Remnants, I was so excited to read that book! It felt like I had been waiting forever to get a chance to read it! And it was amazing, even better than I was hoping!!! :)