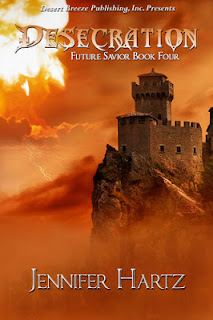 Hi everyone! Well if you have read my blog at all you will know that I am crazy about the Future Savior series by Jennifer Hartz. And today I am thrilled to be taking part in this blog tour to celebrate the December 1st release of Desecration, the fourth book in the series!
Today Jennifer Hartz is joining me with a top five list of the books that inspire her... Take it away Jennifer...
Here's my top five book choices (in no particular order!): 1. The Stand by Stephen King This was the first post-apocalyptic book I ever read and I was enthralled. If you're familiar with The Stand then you know there is also a heavy Good vs. Evil theme running through the book. It may not seem like it right now, but both of these weigh heavily into The Future Savior Series. 2. Harry Potter and the Prisoner of Azkaban by J.K. Rowling I probably could list any Harry Potter book, but Azkaban was the one that REALLY pulled me into the series. The time travel element of the time turner was so cool! Obviously, I'm a huge fan of time travel stories. 3. The Lord of the Rings the Return of the King by J.R.R. Tolkien I don't know if I need a whole lot of commentary on how much the Lord of the Rings have influenced me! After you read FS4: Desecration you'll see that my love for Tolkien's series is even bigger than you may think. 4. The Hunger Games by Suzan Collins I know this list is supposed to be about books that influenced The Future Savior Series... but I couldn't list books without listing this one. I actually read this series after I wrote the first three FS books and I'm listing it here because... well, they're awesome! 5. Waterfall by Lisa T. Bergren Like The Hunger Games, I didn't read The River of Time series until after I wrote the first three books of FS. However, I think Bergren's series helped shape my writing of Desecration. I'm honestly thankful I read Bergren's series before writing FS4 because I believe Desecration is the best out of the four FS books!
And now I (Caitlyn here) have a short piece of Future Savior fan fiction that I would like to share today! Enjoy!... DISCLAIMER This is purely fan fiction, no profit is intended from it whatsoever! One night at dusk, Shaw and I went for a stroll around Verna Mount. We walked hand in hand under the ever darkening sky, we walked through a field of flowers that resembled daisies but had bright purple petals. It was in this enchanting field that Shaw stopped suddenly and turned me toward him. "Would you like to dance, Christina?" I couldn't help laughing. "Right now?" I asked. "Sure, why not?" Shaw was grinning like a kid who had just met the real Santa Claus. "Well, for one thing, there isn't any music," I stated. "What about the wind," Shaw said as a sudden gust of wind blew my hair in my face. I scowled. "Secondly it is almost dark, and I can't even see what is directly in front of my face," I looked up at the murky starless sky. "How do you expect me to dance?" I asked. Shaw didn't answer. He lifted our hands which were still twined together, and wrapped his other hand around behind my back. I sighed and placed my hand on his shoulder. He took a step and I tensed, I really didn't want to look like an idiot stumbling around in the dark. Although I couldn't see his face, I could feel Shaw smiling down at me. "Relax, close your eyes and listen," he said. I sighed but did as he said. And suddenly I could hear all the sounds of the coming night swirling into the most beautiful music I had ever heard. I let the music move my heart and soul. "Open your eyes," Shaw whispered in my ear. When I opened my eyes I noticed that apparently the music had moved my body as well, although I had been unaware of it. Shaw and I were twirling gracefully with such skill it felt like we belonged in a 19th century ballroom. Shaw lifted our arms and twirled me twice. Suddenly I noticed that I could see his face, I looked up at the sky and gasped in delight. There were more stars than I had ever seen before and they were shining nearly as bright as day, almost as if the Creator of the universe was smiling at us. Suddenly I realized with awe that this was true, God had orchestrated this perfect moment just for us. Shaw smiled at me and nodded, almost as if he had heard my thought. He pulled me closer and we continued waltzing under the brilliant sky to the soaring music of God's symphony. Jennifer is also giving away an autographed copy of Future Savior Book One:Conception enter via the Rafflecopter below! a Rafflecopter giveaway
Posted by Unknown at 10:09 AM No comments:

This was my first book by this author, it will not be my last! Unending Devotion is an enthralling, amazing, incredible read! I thoroughly loved reading it! The author fabulously blended historical romance with just enough suspense to keep you completely engaged in the story! The character development, settings, dialogue, and every bit of the plot were first rate! I really can't put into words how much I loved this book, I loved Lily and her mission to save the world, I loved Connell, I loved Oren, but most of all I loved the fact that both Connell and Lily grow in the Lord throughout the course of the novel! I can't say anymore for fear of entering spoiler territory! But I will say that this book  is fabulous, I loved it and I highly recommend it to anyone and everyone who enjoy historical fiction with romance!!! I received this book for free from Bethany House publishers in exchange for my honest review. The above is my honest opinion. All thoughts and opinions are one hundred percent my own.
Posted by Unknown at 2:16 PM No comments:

Review of Against The Tide by Elizabeth Camden 5 Stars!!!

I cannot begin to find the words to describe how much I am in love with this book! Everything about it is excellent, amazing settings, fabulous characters, fascinating historical facts, touching romance, and fantastic writing that makes you smile, laugh and tear up! What more could you want from a book? I was absolutely entranced from the first page, and as soon as I finished it, I  had a burning desire to read it again! It is officially one of my favorite books of the year and one of my all time favorites! I just have to say that Bane and Lydia are now at the top of  my list of all time favorite heroes and heroines!!! This was my first book by Elizabeth Camden, but I am now a fan of her writing and can't wait to read her other books! Another thing I loved about this book is that it had a perfect amount of adventure and suspense. Flawless and riveting, you will not regret reading this book! It is one of the most realistic historical novels I have ever read! I can't gush enough about this book, it is superb! I highly recommend it to anyone that loves historical romance!  Completely enthralling, one of the best books of the year!  I received this book for free from Bethany House publishers in exchange for my honest review. The above is my honest opinion. All thoughts and opinions are one hundred percent my own.
Posted by Unknown at 12:40 PM 3 comments:

Review of A Christmas Home by Greg Kincaid 5 Stars!!!

Words truly cannot describe how simply wonderful this book is! I have not read the previous books in this series, but now I very much look forward to reading them! Some of my favorite things about this book are how heartwarming and real the story is! I am not a fan of excessive detail in writing, and I think that the author did an excellent job of giving enough detail and yet leaving you enough freedom to use your imagination! The prologue completely captured my heart, and I was captivated from that point on! This is a very quick read, I read it in less than a day, but every word is fabulous! With the holidays coming up I definitely plan on reading it again!  What more can I say, I loved it!!!  I highly recommend A Christmas Home to everyone!!!  Click HERE for the authors website, HERE for more info and HERE for the authors bio! I recieved this book for free from WaterBrook Multnomah in exchange for an honest review, my review was not required to be positive, the above review is my honest opinion. All thoughts and opinions are one hundred percent my own.
Posted by Unknown at 2:17 PM No comments: