The shadow of the Great War looms over Europe, affecting everyone in its path.

Leila Durand, an elite German spy charged with infiltrating the home of British icon Thomas Steele, sees the war as a chance to move beyond the pain of her shattered past. But everything changes when she falls in love with Thomas's son, Malcolm. Is there a way to reconcile her love for Germany and her love for the enemy?
Thomas Steele sees the war as an opportunity for his profligate son, Malcolm, to find a purpose greater than himself. But when Malcolm rebels, it falls to Thomas to make tough decisions.
The war's reach extends to the heart. Eleanor Thompson finds her faith is pushed to the breaking point when her husband disappears on the battlefront and her daughter is killed in a German air raid. Where is God in the midst of her pain? In the Shadow of Your Wings presents inescapable truth that resonates across the past century. Then as now, the struggle for faith is real. Then as now, there is a refuge for all who will come beneath the shadow of God's wings. Divided by a lie. Haunted by the past. Bonded by their love.

As the fires of the Great War rage across the European continent, the Steele family is caught in the midst of the inferno.
Estranged from his wife Malcolm wonders if he can ever find forgiveness for his betrayal as he begins the long journey home.
Leila desperately searches for a way to escape her past life as a spy—and the German agent who has been sent to kill her—as she struggles to prove her innocence.
Determined to save his family, Thomas risks everything in a high-stakes political gamble, bringing Britain to the brink of obliteration, as spymaster Robert Hughes plots his downfall.
Will everything be reduced to ashes?Or does God still walk with those who, through faith, step out into the midst of the flames? The smallest flame can conquer the darkest night

Darkness gathers in the final days of the Great War as the Germans plot to unleash a weapon that will plunge the Allied world into obscurity.
For the Steele family, the stakes have never been higher.
Leila is forced back into the shadows when the leader of a German spy ring kidnaps her child, jeopardizing Europe’s fragile bid for peace.
Meanwhile, Malcolm fights to keep Northshire Estate as his father stands trial for treason against the British empire.
Confronted with overwhelming circumstances from their past, the Steeles must rely on their grit and faith to conquer the night.
But will it be enough?

In the Shadow of Your Wings

Leila slipped her shoes back on, held her breath to still her racing heart, then plastered  on a sedate smile. “Oh, there you are darling!” She minced toward him, eyes wide. “So, did you  conquer the old dragon?”

He caught sight of her and paused, standing before the three paintings of his ancestors.  His face was worn, creased by lines that hadn’t been there only a few minutes earlier. Something  was wrong. Terribly wrong.

“Malcolm?” Her voice quavered. “Malcolm, what is it?” His eyes had never been so dull.  Whatever had happened in that room seemed to have sucked the life out of his blood.

Her blood ran cold. “He’s done it, hasn’t he? He’s disinherited you.”

Malcolm nodded, averting his eyes. “He’s kicked me out of my home.”

“It’s my fault.” Leila touched his chest as guilt washed over her. “Malcolm, I’m to blame.  Were it not for me…”

He stepped closer and cupped her cheek with his hand.

“No, Leila.” His blue eyes roamed over her face. “I made my choice. I love you.”

Tears stung the back of her eyelids and she looked away. What have I done? If he only  knew the truth…

“Shh...” He pressed her to him and she listened to the rhythm of his heart. She had been  sent to use him, not fall in love with him. But she did love him. And he loved her enough to walk  away from his father and all that he knew—for her.

She took his hand. “Leave me Malcolm. Only your father knows about our marriage. Tell  him you’re sorry and you’ve made a mistake. Tell him—”

He crushed her lips against his own. For a long moment, he just held her, ignoring the  tears that slipped down her cheeks. At length, he pulled away. “That’s a no, in case you were  wondering.” A faint smile touched his lips as he fingered a few strands of her blonde hair.

She hesitated, her heart splitting with guilt and concern. “I have a flat in London,” she  said. “We’ll go there and sort out what we’ll do next.”

In the Midst of the Flames

"Malcolm rolled onto his back, folded his hands behind his head, and stared up at the  brothel’s ceiling. So, Leila, I’ve kept my word.

His mind flitted to the last time he had seen his wife. After hearing about the severity of his  wounds, Leila had travelled with his father, Thomas Steele, to visit him at a hospital at Etaples.  The reunion had been anything but happy.

Malcom’s lips curled back in a sneer. At that fateful encounter, Leila had revealed that she  was a former German spy, recruited by Abteilung 3B to elicit secrets from the son of Sir Thomas  Steele. As a personal friend to both the Prime Minister of England and the head of British  Intelligence, Thomas was too tempting a target for Germany to ignore.

And I was the gullible errand boy.

He slammed his eyelids shut. Eight months after he had learned the truth, he was still unsure  of what hurt worse—the fact that he had just been a necessary tool to get to Thomas, or the fact  that Leila had deceived him at all.

With a groan, Malcolm buried his face in his sweaty palms. After learning of their marriage,  Thomas had banished the pair from his home at Northshire. Too late, Malcolm had discovered  a duplicitous side to his golden-haired beauty. Furious at her betrayal, he had fled to the Front  where the battles were physical and not of the heart.

Leila betrayed me. She deserves no better.

Why then did he feel sick with shame?"

In the Dead of the Night

"Bending down, Leila scooped her son into a protective embrace and kissed the fuzz on top  of his head. His tufts of hair were a mixture of her own mane of gold and Malcolm’s shaggy  brown, but his eyes were the same shade of green as her own.

He’s perfect, Malcolm. I want you to see him. To hold him. To love him as I love him.

Leila let out a deep sigh. “Did I make a mistake, Jenny? Am I wrong to love Malcolm as I  do?” Life was complicated. God had forgiven her past, but it seemed that those made in His  image would not. One mistake had spawned a litany of consequences that she couldn’t outrun  no matter how hard she tried.

Leila rubbed her cheek against the soft top of her son’s head, savoring the fragrant mixture  of life, hope, and new beginnings. She would not—could not—allow him to pay for her sins.  Which had led her to this point.

Lifting her chin, Leila met her gaze. “Change everything.” JP Robinson is an award-winning author of historical/political suspense, a full-time minister, and the president of Lancaster Christian Writers Association. With a tagline of “Unforgettable drama, Undeniable Truth, ” JP’s high-adrenaline novels often mesh real-world marriage and parenting scenarios with vivid fiction. His books have been praised by industry leaders such as Publishers Weekly.

JP often speaks to writers and church groups within the United States and internationally. He has been happily married for over fifteen years to his high school sweetheart.
CONNECT WITH JP: Website | Facebook | Twitter | Instagram

PLUS (5) additional winners of digital copies of the complete Northshire Heritage set (PDFs)! Full tour schedule linked below. Giveaway began at midnight July 26, 2021 and will last through 11:59 PM EST on August 2, 2021. Winner will be notified within 2 weeks of close of the giveaway and given 48 hours to respond or risk forfeiture of prize. Print copy US only. Void where prohibited by law or logistics. 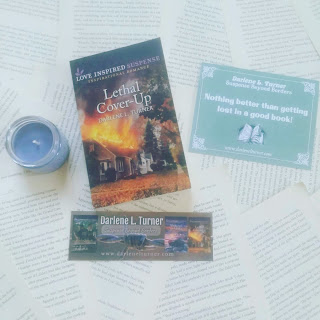 What an excellent romantic suspense from one of my favorite authors! I eagerly anticipate each new release from this author and Lethal Cover-Up did not disappoint! Madison and Tucker were both great main characters, I loved that they had known each other since they were kids and that their love story featured the friends to more and second chance romance tropes (two of my favorites!) One of the things I love so much about this author's books is how nonstop action packed they are (Lethal Cover-Up was no exception, I hardly had time to catch my breath before I'd be back on the edge of my seat and I loved every minute of it!) But this author also does a fabulous job of balancing the action and suspense with romance, character growth, and a wonderful faith message! This story is chock full of everything I love about the Christian romantic suspense genre, and is not to be missed! I loved Lethal Cover-Up and most highly recommend it!

I cannot wait for Darlene L. Turner's next book!

I received a copy of this book from the author. My review was not influenced in any way. All thoughts and opinions are one hundred percent my own.

Posted by Caitlyn Santi at 11:20 AM No comments: 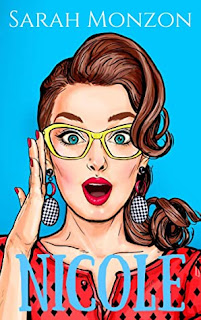 Oh my word! I adore Sarah Monzon's books! I've been loving the Sewing in SoCal series, and Nicole is my favorite one yet! I loved Nicole, I really enjoyed her in the two previous books and I knew I'd love her story, and love it I did! As a curvy girl I loved that Nicole was a curvy and confident woman, bravo Sarah! And authors: more curvy heroines, please! And Dr. Drew, oh my goodness, that man. I simply can't find the words to express how much I love him. He cracks me up with his hilarious sense of humor, and his kindness, tenderness, and selflessness totally warmed my heart, no spoilers but the visits he made to the hospital's third floor totally melted me into a puddle! I seriously adored everything about this story, loved every minute I spent reading it, and I hated for it to end!

This hilarious romcom is delightfully perfect in every way! Nicole is one of my favorite reads of 2021 and I most highly recommend it!

I received an audiobook copy of this book from the author. My review was not influenced in any way. All thoughts and opinions are one hundred percent my own.

Posted by Caitlyn Santi at 7:57 AM No comments: