Review: With You Here by Sarah Monzon 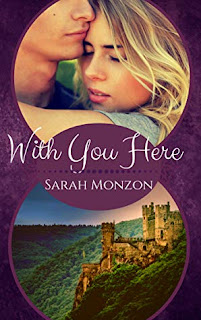 5 Stars!
Ahh, happy sigh! After reading (and loving!) the first three books in the Carrington Family series earlier this year, I was super excited for Amber's story! With You Here did not disappoint, it was everything I dreamed it would be and so much more! While our lives are different I could relate to Amber in so many ways. I too know what it's like to wonder if God has actually called you to something or if it was actually your own voice you heard, so her story deeply touched me and inspired my heart! I am seven years older than Amber was in this book, but I too made a commitment to purity as a teen, and have never been kissed nor gone on a date, and this story was a beautiful reminder of why I'm waiting for the right man and totally renewed my hope that there is still a man out there that God created for me, and me for him!
I loved Seth so much, he is so sweet and such a good man, and I couldn't help smiling every time he appeared on the page!
I loved this book so much! I adored everything about it and it was an absolute delight to read! With You Here is right up there among my favorites of Sarah Monzon's books and I know I'll definitely be rereading it in the future! With You Here is without question one for the keeper shelf! I highly, HIGHLY recommend it! Be sure to grab yourself a copy, you will not be sorry!

I received an ebook copy of this book from the publisher which did not influence my review in any way. All thoughts and opinions are one hundred percent my own.

Posted by Caitlyn Santi at 2:49 PM No comments:

As The Light Fades by Catherine West Spotlight + Excerpt & Giveaway!

Welcome to the Blog + Review Tour for As the Light Fades by Catherine West, hosted by JustRead Publicity Tours!

Sometimes we’re placed in the strangest of circumstances for the most important reasons.

After her carefully constructed life crumbles, Liz Carlisle finds herself back on Nantucket, picking up the pieces. With the family estate under renovations, the solitude she craves seems out of reach.

Matthew Stone intends to steer clear of his new tenant. She’s carrying a load of baggage, but as long as she pays the rent, he’ll let her be. He’s got enough to deal with caring for his wayward niece, Mia.

Liz doesn’t have time for teenagers and her track record with men is abysmal, but an unlikely friendship forms between the three.

When her former boyfriend is charged with assault, Liz is called to testify against him. But he knows the darkest secrets of her life—secrets she’d hoped to keep buried forever, and he’s ready to reveal them. Telling the truth is the right thing to do, but it may cost her everything she’s worked so hard for, and all she’s come to love.

Catherine West is an award-winning author of contemporary women’s fiction. When she’s not at the computer working on her next story, you can find her taking her Border Collie for long walks or reading books by her favorite authors. She and her husband reside in Bermuda, and have two adult children and two beautiful granddaughters. Catherine is the winner of the 2015 Grace Award (Bridge of Faith) and a two-time winner of Romance Writers of America’s Faith, Hope & Love Reader’s Choice Award (The Things We Knew, 2017 and Where Hope Begins, 2019, and a Carol Award Finalist for Where Hope Begins. Her latest novel, As the Light Fades, releases September 2019.

Catherine loves to connect with her readers and can be reached at Catherine@catherinejwest.com

(1) winner will receive a $75 Amazon gift card from the author!

Be sure to check out each stop on these tours for more chances to win. Full tour schedule on this tour shown below. Giveaway begins at midnight September 11, 2019 and will last through 11:59 PM EST on September 18, 2019. Winners will be notified within 2 weeks of close of the giveaway and given 48 hours to respond or risk forfeiture of prize. US/CAN only. For our giveaway rules and policy, click HERE.

Liz knocked, then pushed open the front door of the new extension David and Josslyn had just moved into days ago. The sound of total bedlam reached her ears, and she smiled at Mia’s raised eyebrows. The dogs were barking and the kids yelling, and they all came charging in their direction the moment she called out a hesitant hello.
“STAY!” Liz stepped in front of Mia and put up a hand. Diggory and Jasper screeched to a halt on the new terracotta tiles, tails wagging, tongues lolling. But the twins paid no mind and launched their little bodies at her with an exuberance she could hardly ignore. Liz crouched to hug her niece and nephew and shot a side look at Mia, who was hovering by the front door. “You okay with dogs? And kids?”
“I guess.” She didn’t look too concerned. Liz stood and pointed at the dogs. “This is Diggory, that’s Jasper. They’re very friendly.” To prove the point, they both lolloped toward Mia, licking her hands when she attempted to pet them.
“Do the kids have names or just the dogs?” A giggle shot out of Mia. Liz startled at the sound. She wouldn’t have believed it if she hadn’t been standing beside her.

Excerpt From: Catherine West. “As the Light Fades.” iBooks.

Review: Ford by Susan May Warren 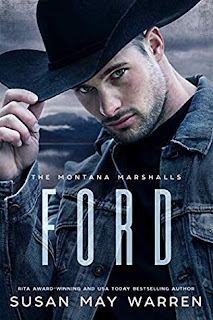 5 Stars!
Eeep! *swoons over Ford*
If only it was possible for me to give this book more than 5 stars! I have been loving the Montana Marshalls series, and having already met youngest brother Ford (and fallen head over heels in love with him!) in the previous book, Tate I have been eagerly anticipating Ford and Scarlett's story, and wow did it surpass all my expectations! I loved the first two books, but Ford is by far my favorite book of the series so far! This book was everything I dreamed it would be and so much more!
In my opinion Ford is Susan May Warren's best book yet! I absolutely adored everything about this book, and I couldn't stop reading! There's so much more I want to say about this amazing book, but I don't want to risk giving anything away so I will just say that this book kept me enthralled from beginning to end! I was totally and completely spellbound by this story, and I absolutely loved every moment I spent reading it! This whole series so far is incredible and I highly HIGHLY recommend it. The books in the series can standalone if necessary, but trust me, you're not going to want to miss a moment of this fabulous series! I am dying to read Wyatt and see what happens next in the Marshall family saga!

I received an ebook copy of this book from the publisher which did not influence my review in any way. All thoughts and opinions are one hundred percent my own.


Posted by Caitlyn Santi at 8:44 AM No comments: