Welcome to the Blog + Review Tour & Giveaway for Wyatt, the fourth book of The Montana Marshalls series by Susan May Warren, hosted by JustRead Publicity Tours!

He’s lost her twice…he’s not going to lose her again...

NHL Hockey Goalie Wyatt Marshall has everything--fame, money and a thriving career. But he’s hiding the two things that matter most...a career-ending injury, and his broken heart. He’s been in love with Coco Stanley since she walked into his life at age fourteen, a foster child for the Marshall family. She stole his heart years later, when, after a secret tryst, she returned to her home country of Russia. But she won’t let him back into her life—and he can’t figure out why.

She’s harboring a secret that could cost lives...

Coco Stanley is tired of living her life undercover. Or at least, with an assumed name, always pretending to be someone she’s not. And that’s not the only secret she’s harboring. If Wyatt discovers the real reason she left him, it might just destroy him. She’s resigned herself to loving him from afar...

But when he discovers she’s in danger...

Wyatt is horrified when he learns Coco has been shot and left in Russia, her fate unknown. There is nothing—nothing—that will stop him from finding her. So what if he’s not one of his super-heroic brothers, not a Ranger, not a SEAL...Wyatt is a hockey goalie, a special kind of crazy brave. Except, is he brave enough to face the secret Coco is keeping, or will it destroy everything he’s hoped for?

What will it cost them to save her?

What Wyatt and Coco don’t know is that revenge is stalking her and bringing her home just might cost them their long-awaited happy ending.

Susan May Warren is the USA Today bestselling, Christy and RITA award-winning novelist of over sixty-five novels. An eight-time Christy award finalist, a three-time RITA Finalist, she’s also a multi-winner of the Inspirational Readers Choice award, and the ACFW Carol Award.

A seasoned women’s events speaker, she’s a popular writing teacher at conferences around the nation and the author of the beginning writer’s workbook: The Story Equation.

She is also the founder of MyBookTherapy.com, and Novel.Academy, a school for aspiring novelists.

(1) winner will receive a signed copy of Wyatt and a Montana Marshalls Magic Mug! 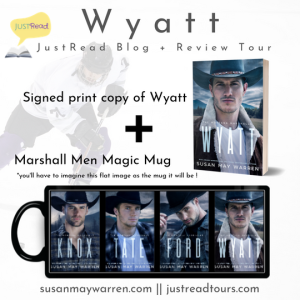 Be sure to check out each stop on the tour for more chances to win. Full tour schedule shown below. Giveaway will begin at midnight October 2, 2019 and last through 11:59 PM EST on October 9, 2019. US only. Winner will be notified within 2 weeks of close of the giveaway and given 48 hours to respond or risk forfeiture of prize.


5 Stars!
I am loving the Montana Marshalls and Wyatt was yet another great addition to the series! I love reunion romances and it was great to finally get Wyatt and Coco's story, they are both very sweet characters and I loved watching them overcome the baggage of their past and start to rebuild their relationship. This series has more twists and turns than a bakery full of pretzels, all of which never fail to bring me to the edge of my seat. The plot has thickened with each book, and I cannot wait to see what happens next in the fifth and final book, Ruby Jane! I have to say that Ford is still my favorite book in the series so far, but I truly did love reading Wyatt! This series is one of Susie May's best and I highly recommend it! If you haven't started the series yet I recommend you begin with book one, Knox. This is definitely a series that is best read in order, and trust me you won't want to miss a single moment of the awesomeness that is this series!

I received an ebook copy of this book from the publisher which did not influence my review in any way. All thoughts and opinions are one hundred percent my own.
Posted by Caitlyn Santi at 12:00 AM